A National Security Agency map that shows nearly 700 cyber-assaults on computers at American military installations, government agencies, businesses and educational institutions raises the question among security experts whether the NSA should have shared some of that information.

The NSA map, from 2014 and obtained by NBC News, purports to show the Chinese government's massive cyber-assault on all sectors of the U.S economy, including major firms such as Google and Lockheed Martin, as well as the U.S. government and military. Red dots representing more than 600 corporate, private or government sites can be seen on the map, with many of the dots concentrated along the northeast corridor and Silicon Valley. The highest number of attacks were in California. 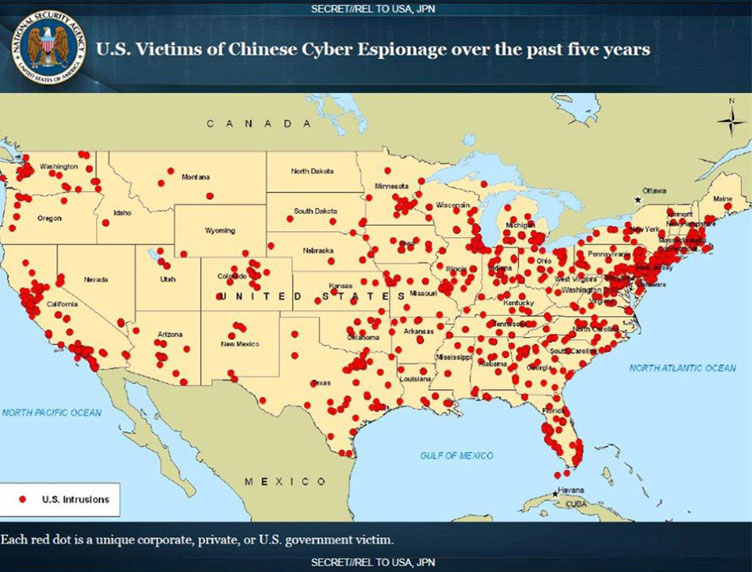 "That includes information technology, biological, pharmaceutical, advanced manufacturing energy development," says Jason Healey, senior research scholar at Columbia's University School of International and Public Affairs, in an audio report by Information Security Media Group (click on player above to hear the report). "And you can see that in the geographic distribution of their espionage."

In the report, you'll hear:

An intelligence source told NBC News that the map was part of an NSA briefing, prepared by the NSA Threat Operations Center in February 2014, which highlighted China's interest in Google and defense contractors such as Lockheed Martin, and in air traffic control systems.

The intelligence source told the news network that the NSA catalogued the documents and data Chinese government hackers have stolen from U.S. corporate, government and military networks, and also listed the number and origin of China's "exploitations and attacks.

NSA did not respond to an ISMG request for comment.

The White House attitude toward avenging Chinese hacking could be changing. The New York Times reported over the weekend that the Obama administration has determined that it must retaliate against the Chinese for a computer breach earlier this year at the Office of Personnel Management, which exposed the personal records of some 22 million individuals. However, the report says administration officials continue to struggle on deciding what it can do without prompting an escalating cyber-conflict.

Next Security: The New Measure of Success

Five Things to Consider Before Embarking on a SASE Project