The U.S. Department of Justice on Wednesday announced one of its biggest-ever cybercrime disruptions after it shuttered the Infraud Organization, an online forum that prosecutors say had more than 10,000 members dedicated to the pursuit of fraud.

A nine-count superseding indictment by a federal grand jury in Las Vegas, unsealed on Wednesday, charges 36 individuals with a range of offenses, including racketeering conspiracy. It ties them to $530 million in confirmed losses due to fraud and says they intended to steal more than $2.2 billion.

Operating under the slogan "In Fraud We Trust," as of March 2017, Infraud sent members and potential customers to members' automated vending sites, which sold everything from point-of-sale malware and banking Trojans to stolen payment card details and counterfeit identification, the Justice Department says.

"Today's indictment and arrests mark one of the largest cyber fraud enterprise prosecutions ever undertaken by the Department of Justice," says John P. Cronan, the acting assistant attorney general of the Justice Department's criminal division.

"As alleged in the indictment, Infraud operated like a business to facilitate cyber fraud on a global scale," Cronan says. "Its members allegedly caused more than $530 million in actual losses to consumers, businesses, and financial institutions alike - and it is alleged that the losses they intended to cause amounted to more than $2.2 billion."

The indictment charges 36 individuals by name, except for seven named only as "John Doe," although identified by aliases such as "Aimless88," "Best4Best," "Carlitos" and "Goldenshop." Some of the defendants have also been charged with possessing 15 or more counterfeit and unauthorized access devices. 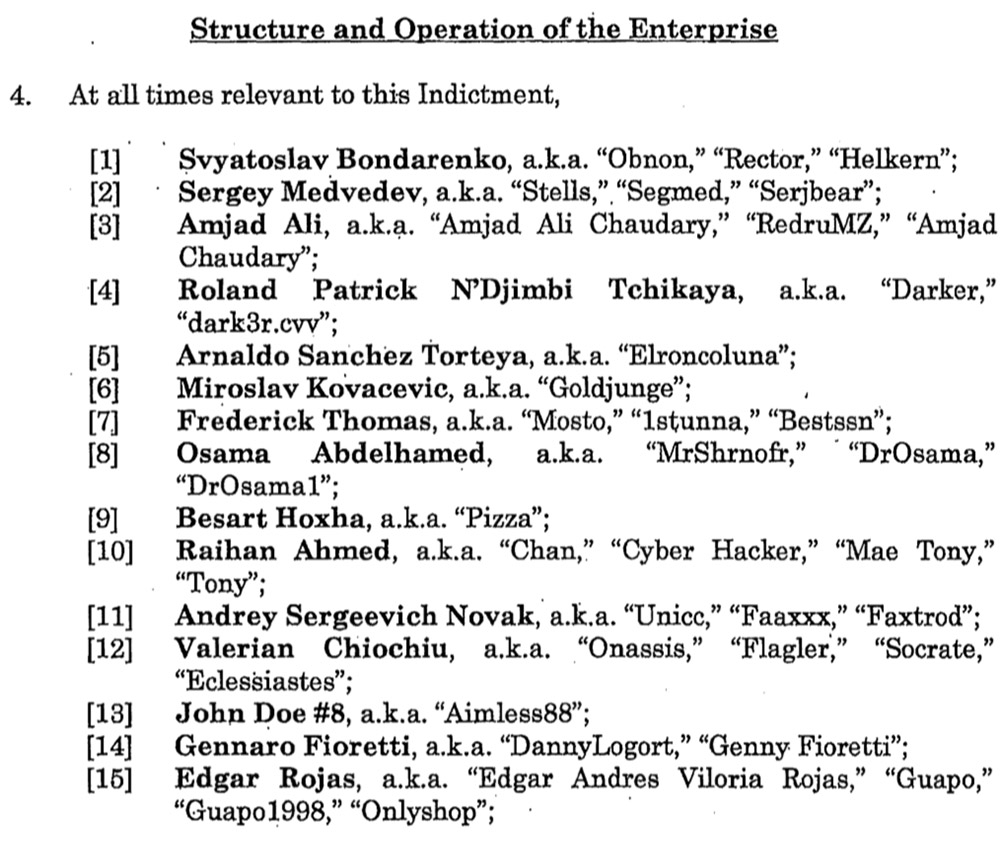 Excerpt from the indictment. (Source: Department of Justice)

The indicted U.S. suspects are based in Alabama, New York and California.

Beyond the aforementioned seven countries in which suspects were arrested, other countries in which alleged Infraud operators are based include Bangladesh, Canada, Egypt, Italy, Ivory Coast, Kosovo, Macedonia, Moldova, Pakistan and Russia.

Infraud was launched in 2010 by now 34-year-old Ukrainian national Svyatoslav Bondarenko - aka "Obnon," "Rector" and "Helkern" - who acted as administrator of the site, although he appeared to stop using the site in 2015, according to the indictment. He remains at large.

Sergey Medvedev helped co-found Infraud and also acted as a site administrator as well as provider of digital currency escrow - currency exchanging - services "for the benefit of Infraud Organization members engaging in transactions with other members, to ensure the integrity of those transactions," according to the indictment. "After Bondarenko went missing in 2015, Medvedev took his place as owner and administrator of the Infraud Organization."

Medvedev has been arrested. 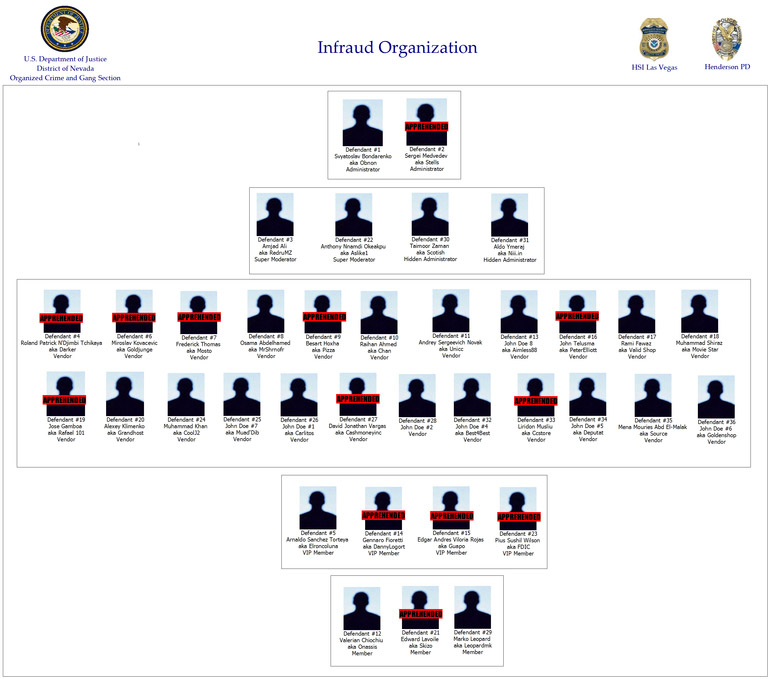 A to Z of Carding

The indictment includes a literal A to Z of card fraud forums, defining such terms as:

The indictment ties some of the 36 suspects to the above services. 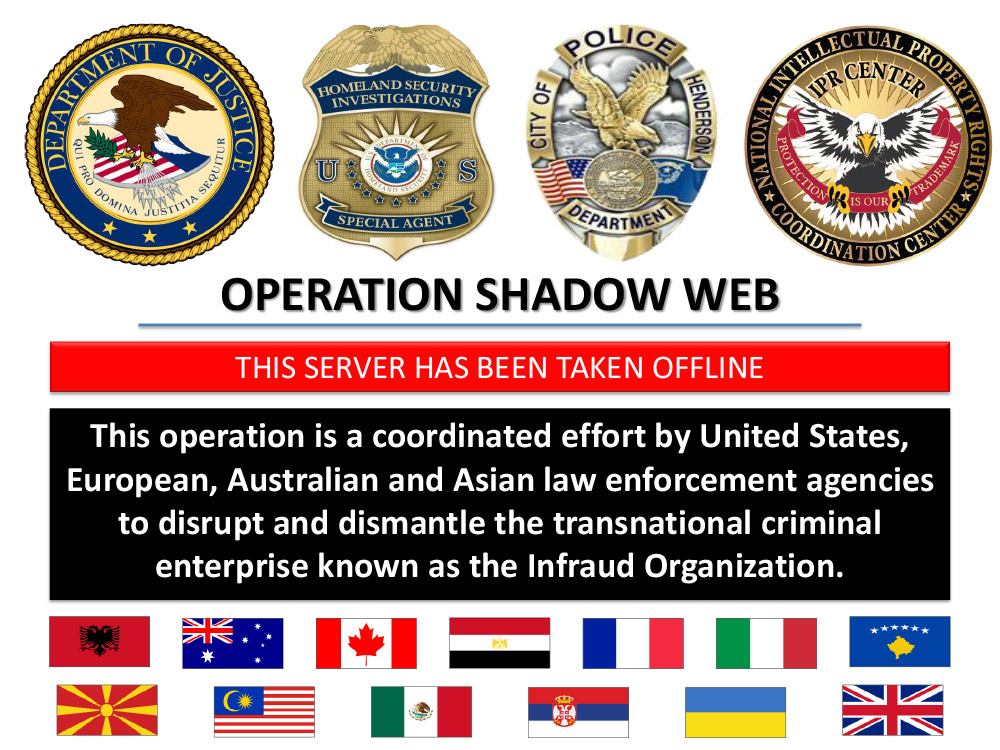 Alabama-based Frederick Thomas, 37, aka "Mosto," "1stunna" and "Bestssn," 37, is charged with joining Infraud in 2011 and serving as the "vendor of a Social Security number and date of birth lookup service."

One alleged member, 25-year old Besart Hoxha - aka "Pizza" - of Kosovo has been accused of joining Infraud the same year and advertising himself as a vendor of "High Quality Plastics & Holos VISA, MasterCard, Amex, Discover" who "sells plastic card stock and holograms to Infraud Organization members and associates."

Another suspect, 28-year-old Valerian Chiochiu - aka "Onassis," "Flagler," "Socrate" and "Eclessiastes" - of Moldova joined the organization in 2012 and "provides guidance to other members on the development, deployment, and use of random access memory ('RAM') point-of-sale ('POS') malware as a means of harvesting stolen data," according to the indictment.