The FBI has arrested a Chinese national on charges that he was a "malware broker" who distributed a remote-access Trojan called Sakula. The malware has been tied to multiple mega-breaches, including attacks against health insurer Anthem and the U.S. Office of Personnel Management.

Yu Pingan, 36, of Shanghai, was arrested Wednesday after he flew to the United States to attend an unnamed conference, CNN reports.

The FBI could not be immediately reached for comment, but the bureau confirmed the arrest to CNN.

A complaint against Yu Pingan, a.k.a. "GoldSun," was filed Monday and unsealed Tuesday. 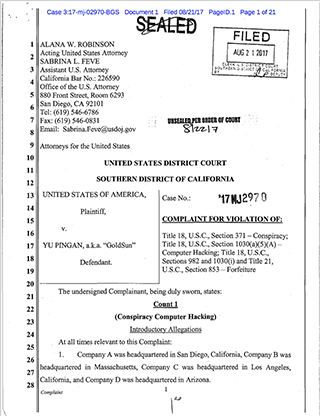 The malware was used in the OPM breach - one of the worst breaches to have ever affected the U.S. government. It resulted in the exposure of millions of government workers' Social Security numbers, as well as security clearance forms filled with detailed and often extremely private personal information.

Sakula is known to have targeted a U.S. turbine manufacturer, Capstone Turbine, based in Los Angeles. Based on previously published research, which correlates with malware detailed in the affidavit, company C appears to be Capstone Turbine.

The FBI says attackers utilized watering hole attacks - infecting a site they suspected victims would visit with malware - and made use of zero-day exploits.

"The intrusion into company C began in approximately January 2010," reads the affidavit, submitted by FBI Special Agent Adam James, a former information security consultant who works from the FBI's San Diego field office and has investigated cybercrime for the bureau since 2010.

"In September 2012, malicious files were installed on company C's web server (the server that hosts the company's website) as part of a watering hole attack that, between Sept. 18, 2012 and Sept. 19, 2012, distributed malicious code to 147 unique U.S.-based IP addresses, using a zero-day exploit now known as CVE-2012-4969. Between May 2012 and January 2013, Company C's web server hosted no less than five variants of Internet Explorer zero-day exploits."

Attacks that utilize Sakula malware are relatively rare, and the FBI says it has evidence showing Yu discussing the malware before it was ever seen used in attacks.

"Seized emails tie Yu and UCC [uncharged co-conspirator] #1 to this previously unknown malware," according to James' affidavit. "In addition, I believe that the novelty and rarity of this malware is evidence that only a small group of hackers knew of it and that they were working together."

The FBI says it first learned of Sakula malware in November 2012 and believes that the malware was only used by a single group.

"The intrusions ... involved variants of an uncommon malicious software tool known as 'Sakula.' The intrusions also used the overlapping use of other hacking tools, techniques, internet protocol ('IP') addresses, email accounts and domain names. For these reasons, the FBI believes the same group of conspirators was responsible for the intrusions."

Emails allegedly sent by Yu in 2011 make reference to the malware and describe how a legitimate Microsoft domain in Korea used to download software updates has been compromised.

Email exchange translated from Chinese, that occurred on July 27, 2011, between goldsun84823714@gmail.com - an email account allegedly used by Yu - and an unnamed co-conspirator. (Source: FBI affidavit)

At least one strain of Sakula "was configured to beacon" - announce infected endpoints - to that domain, James writes in the affidavit.

While Sakura might be rare, it was used in the OPM breach, which exposed the personal information of more than 22 million individuals, including background checks containing sensitive information (see Analysis: Why the OPM Breach Is So Bad).

The material obtained in either breach could have been used to blackmail Americans, including government employees and senior officials, security experts warned.

Threat-intelligence research firm ThreatConnect was the first organization to publicly report that Sakula was used in the breach of health insurer Anthem, as well as in a failed phishing attack against U.S. defense contractor VAE. The group that used Sakula tended to employ an elaborate "lookalike" attack infrastructure - meant to mimic the actual networks used by their targets.

Information security expert Matt Tait, a senior fellow at the Robert Strauss Center for International Security and Law in Austin, Texas, who tweets as @pwnallthethings, says the Sakula group's attacks also targeted at least one French aerospace firm as part of what security firms dub the Aurora Panda attacks.

Regarding the Yu arrest, the malware and operations he did were part of "Aurora Panda" attacks on French aerospace https://t.co/cgAXb0cJpV

The FBI's affidavit against Yu, charging him with conspiracy to commit computer hacking, does not call out the Chinese government. But it alleges that Yu's collaborators were based in China.

How to Avoid a Data Breach