Officials from Facebook and Twitter went to Capitol Hill on Wednesday to defend how their platforms are combating ongoing election interference efforts by Russia. But at the same time, the White House and some Republican lawmakers launched coordinated broadsides against social media firms, accusing them of political bias, with President Donald Trump suggesting - without citing any evidence - that the firms were interfering in U.S. elections.

On Wednesday, Facebook COO Sheryl Sandberg and Twitter CEO Jack Dorsey testified at a Senate Intelligence Committee hearing on election interference. Notably absent was a representative from Alphabet's Google, which declined to have someone appear when the committee said the representative it proposed to send wasn't senior enough. Instead, the committee left an empty chair with a placard that read: "Google."

During the "Foreign Influence Operations' Use of Social Media" hearing, Sandberg and Dorsey described the efforts their platforms have taken to combat interference in elections, both in the U.S. as well as those held by its allies. 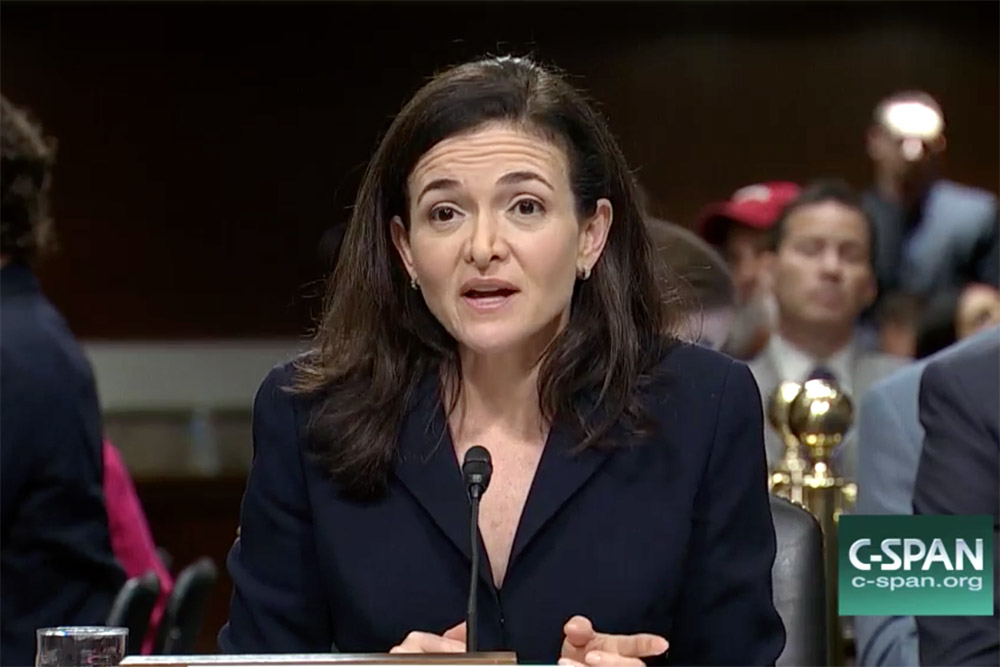 "We were too slow to spot this and too slow to act. That's on us," Sandberg said. Since then, however, she said Facebook has been "investing heavily in people and technology to keep our community safe and keep our service secure." She also said the platform was attempting to make political advertising more transparent as well as to reduce the spread of "false news" (see Facebook's Security and Privacy Overhaul Comes at a Price).

Sandberg said such efforts are already beginning to show results. "We're getting better at finding and combating our adversaries, from financially motivated troll farms to sophisticated military intelligence operations," she said. "We've removed hundreds of pages and accounts involved in coordinated inauthentic behavior - meaning they misled others about who they were and what they were doing."

Both Sandberg and Dorsey said they have also gotten better at working with third parties and responding to influence operations in a more timely manner (see Facebook, Twitter and Google Suspend 'Inauthentic' Accounts).

Trump, meanwhile, this week leveled charges of election interference not against Russia, but against Facebook, Google and Twitter (see How Trump Talks About Russian Hacking).

On Wednesday, the Daily Caller published an interview with Trump in which he was asked if he believed that U.S. social media firms were interfering in the Nov. 6 midterm congressional elections. "I think they already have," Trump said in the interview, which was conducted Tuesday. He offered no evidence to support his assertion.

The administration carried that theme forward, with Attorney General Jeff Sessions on Wednesday accusing social media firms of political bias, continuing accusations that they have been suppressing Trump supporters' viewpoints.

"The attorney general has convened a meeting with a number of state attorneys general this month to discuss a growing concern that these companies may be hurting competition and intentionally stifling the free exchange of ideas on their platforms," Justice Department spokesman Devin O'Malley said in a statement. The meeting is scheduled for Sept. 25.

Some members of Congress continued to field those allegations against Dorsey, when he appeared later in the day, alone, at a House Energy and Commerce Committee hearing.

"Let's be clear from the start: Twitter's algorithms have made mistakes, and its methods for moderating and policing content have been opaque to consumers," Republication Rep. Greg Walden of Oregon, who chairs the committee, said to Dorsey in his opening statement.

"It should now be quite clear that even well-intentioned algorithms can have unintended consequences. Prominent Republicans, including multiple members of Congress and the chairwoman of the Republican Party, have seen their Twitter presences temporarily minimized in recent months, due to what you have claimed was a mistake in the algorithm," Walden said. "It takes years to build trust, but it only takes 280 characters to lose it."

Nowhere in his opening statement did the lawmaker reference election interference or influence operations.

No evidence was submitted by lawmakers to substantiate Walden's allegation. But lawmakers did enter as evidence tweets by President Trump, alleging - again, without citing any evidence - that Twitter marginalized some perspectives.

Republican Rep. Billy Long of Missouri, meanwhile, submitted screenshots of "highlights" displayed to him by Twitter that included links to numerous stories that he believed cast Trump or his supporters in a negative light and which he appeared to find objectionable. 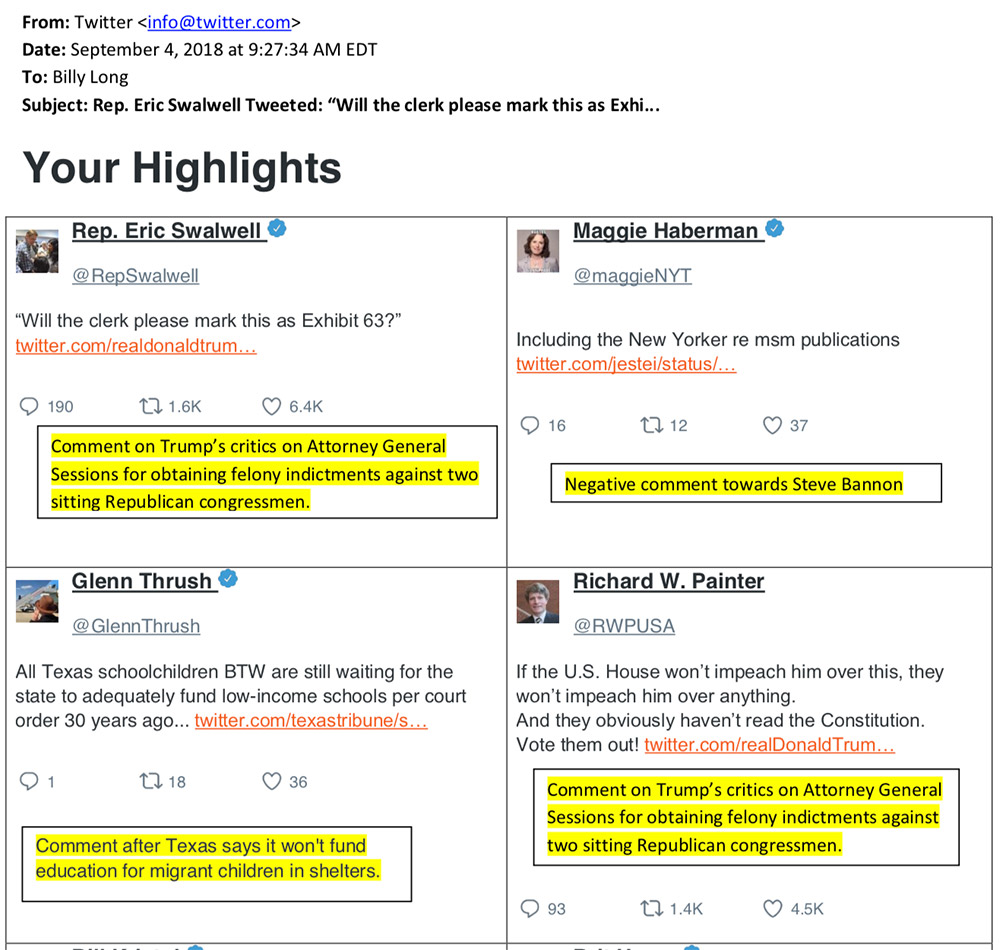 Extract from a document for the hearing submitted by Rep. Billy Long

One was a retweet by Boston Globe's deputy Washington bureau chief, Matt Viser, who replied to @OscarTheGrouch's "I love trash" tweet by saying, "You've come to the right place."

During the hearing, Committee member Rep. Anna G. Eshoo, D-Calif., accused the Republican-led House of holding the hearings - and stoking a backlash - as part of their midterm election fundraising efforts.

"I'm concerned that Republicans are using this hearing as an opportunity to rally their base and fundraise ahead of an election by fabricating an anti-conservative 'bias' problem where none exists, rather than focusing this committee's attention on the legitimate issues that these platforms raise," she said in her prepared remarks.

Numerous technology firms have disputed the notion that there is any political bias in their algorithms. "These accusations are not borne out by data and facts, and they have been widely discredited by major news organizations and experts," a coalition of technology industry groups said in a letter to the committee.

But some industry watchers have suggested that while they see no political bias, private social media firms should be more transparent about how their algorithms work as well as their content management policies.

"Charges of left-leaning bias are not new, of course," says Tarleton Gillespie, a principal researcher at Microsoft Research and an affiliated associate professor at Cornell University, on TechDirt. "They come from a very old playbook conservatives have used against newspapers and broadcasters for decades. Unfortunately, Silicon Valley is partly to blame for why it is working so well today. Search engines and social media platforms have been too secretive about how their algorithms work and too secretive about how content moderation works."

The Electronic Privacy Information Center, a public interest research center, said in a letter to the Senate committee that senators should be demanding greater transparency from social media firms.

"Facebook recently released its community guidelines, explaining how content moderation choices are made. Further information on this process from Facebook and Twitter would provide significant transparency about the platforms' efforts to curtail foreign influence in U.S. politics," it said.

"From a simple business perspective and to serve the public conversation, Twitter is incentivized to keep all voices on the platform," Twitter CEO Jack Dorsey tells the House Commerce Committee on Sept. 5.

"Let me be clear about one important and foundational fact: Twitter does not use political ideology to make any decisions, whether related to ranking content on our service or how we enforce our rules," Dorsey told the House Commerce Committee in his prepared remarks. "We believe strongly in being impartial, and we strive to enforce our rules impartially. We do not shadowban anyone based on political ideology. In fact, from a simple business perspective and to serve the public conversation, Twitter is incentivized to keep all voices on the platform."

Dorsey told the committee that "in the United States, all 100 Senators, 50 governors, and nearly every member of the House of Representatives currently reach their constituents through Twitter accounts."

Even so, he said that after controlling for the numbers of followers, tweets by Democratic members of Congress were viewed at almost identical rates as tweets by Republican members.

Dorsey told the committee that as Twitter announced in January, it found that 1 percent of all election tweets in the run up to the 2016 U.S. elections could be definitively traced to 50,258 automated accounts that have been linked to Russia. He also said that Russia's state-sponsored RT and Sputnik propaganda outlets had spent $1.9 million on advertising with Twitter. He promised Twitter would donate an equivalent amount to "academic research into election and civic engagement."

Experts on the Kremlin's 4D - for dismiss, distort, distract and dismay - campaigns say that RT, the $400 million media operation that covers 100 countries, which was formerly known as Russia Today, is a core part of those efforts (see US Government Accuses Russia of Election Hacking).

"Although the volume of malicious election-related activity that we could link to Russia was relatively small, we strongly believe that any such activity on Twitter is unacceptable," Dorsey said. "We remain vigilant about identifying and eliminating abuse on the platform perpetrated by hostile foreign actors, and we will continue to invest in resources and leverage our technological capabilities to do so."