An Israeli man has been sentenced to serve eight years in prison for running a darknet market search engine called DeepDotWeb.

Tal Prihar, 37, pleaded guilty to conspiracy to commit money laundering before Senior U.S. District Judge Donetta Ambrose in March 2021. He had faced a prison sentence of up to 20 years.

Prihar was one of the administrators of the DeepDotWeb website. The portal provided direct links to a number of darknet markets, which are typically reachable only via the anonymizing Tor browser or an anonymous, peer-to-peer distributed communication layer called I2P.

Authorities have accused Prihar of owning and operating the website with Israeli citizen Michael Phan, 34. The U.S. is currently seeking Phan's extradition from Israel.

DeepDotWeb ranked darkweb markets and also provided a green/red guide to their availability.

The portal also listed the top markets as well as their availability status.

"For six years, DeepDotWeb was a gateway to facilitate the illegal purchase of items to include dangerous drugs, weapons and malicious software," Carlton Peeples, acting special agent in charge of the FBI's Pittsburgh Field Office, said last year.

For every purchase made by someone it had referred, DeepDotWeb received kickbacks via virtual currency, including in bitcoins. By the time DeepDotWeb was shut down in April 2019, when it was seized by the FBI, the bureau says the site had earned referral fees totaling 8,155 bitcoins, which were worth about $8.4 million at the time of the transactions.

Authorities say the referral fees came from least 15,000 users of the portal.

"To conceal the nature and source of these illegal kickback payments, Prihar transferred the payments from his DDW bitcoin wallet to other bitcoin accounts and to bank accounts he controlled in the names of shell companies," the U.S. Department of Justice says.

As part of Prihar's plea, he has agreed to forfeit nearly $9 million worth of currency and assets.

Prihar was arrested in May 2019 at Charles de Gaulle Airport in Paris. At the same time as his arrest, authorities in Brazil, assisted by the FBI, executed a search warrant at the suspect's home in Lago Sul, Brazil, where they recovered cryptocurrency as well as $50,000 in cash. 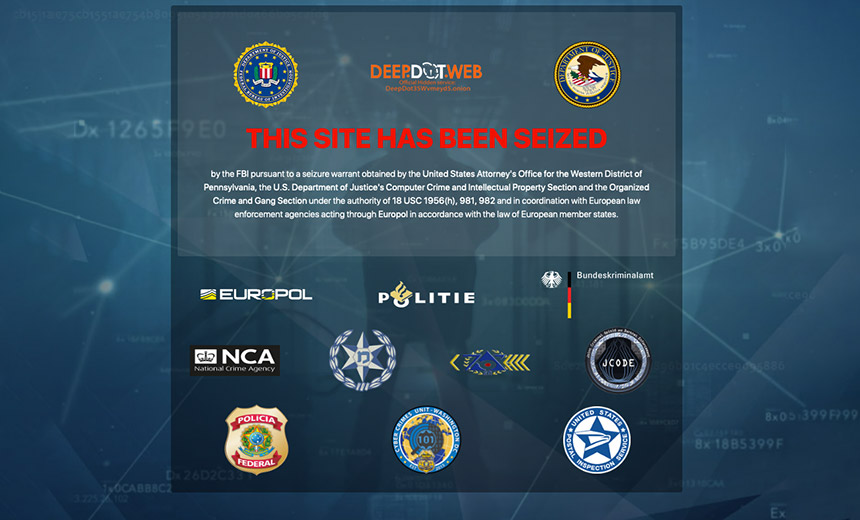 At the time, Brazilian police said the suspect was already known to them, as he'd also been suspected of crimes related to child pornography and was the subject of a search and seizure warrant in that case in October 2018, when police seized $1 million in cash as well as smartphones and physical documents.

Cash seized by police in Brazil from the house of DeepDotWeb administrator Tal Prihar in 2019, when he was detained in France after being indicted by the U.S.

U.S. sentencing guidelines recommended an 11-year prison term for Prihar. But Judge Donetta Ambrose instead gave him eight years and one month, based on his having accepted responsibility and chosen to not fight his extradition from France to the U.S., Pennsylvania's Tribune-Review reported.

At his sentencing hearing Tuesday, Prihar told the court that he hadn't initially known that what he was doing was illegal, but that after he found out, he nevertheless continued due to "danger-seeking and greed," the Tribune-Review reported, noting that the defendant has a wife and four children in Israel.

Prihar's attorney, Michael Comber, told the court that his client has been detained in the U.S. now for 27 months, the Tribune-Review reported.

The darknet market ecosystem has continued to shift since DeepDotWeb was in operation, not least following the takedown of AlphaBay in 2017 and Wall Street Market in 2019, although Russian-language darknet market Hydra remains the largest darknet market in the world, experts say.

Blockchain analytics firm Elliptic says the reasons for these markets exiting are likely numerous, including operators having made enough money to retire, or believing the risk posed by law enforcement is now too great to make it worth their continuing.

In a report, Elliptic says that doing business is also becoming more difficult as the U.S. government continues to sanction cryptocurrency exchanges that fail to comply with "know your customer" and anti-money laundering rules. "As regulation of cryptocurrency businesses such as exchanges has tightened, it has become increasingly difficult to launder these funds," it says.