The Obama administration is floating the idea that the nation's critical infrastructure operators would more likely adopt voluntary IT security best practices if the government engages the insurance industry to help develop the standards and procedures in its cybersecurity framework.

"The goal of this collaboration would be to build underwriting practices that promote the adoption of cyber-risk reducing measures and risk-based pricing and foster a competitive cyber-insurance market," says Michael Daniel, the White House cybersecurity coordinator.

The departments of Homeland Security, Commerce and Treasury have identified eight incentives the federal government could use to encourage the nation's critical infrastructure owners to adopt voluntarily the cybersecurity framework being developed under the auspices of the National Institute of Standards and Technology [see NIST Unveils Draft of Cybersecurity Framework].

The Commerce Department's analysis of the cybersecurity insurance incentive says insurance carriers would bring extensive knowledge of the effectiveness of specific cybersecurity practices and could help evaluate specific proposed elements from this perspective. "This collaboration between insurance companies, NIST and other stakeholders could serve as a basis for creating underwriting practices that promote the adoption of cyber risk-reducing measures and risk-based pricing," the Commerce analysis says. "This collaboration could also foster a competitive cyber-insurance market."

Writing in the White House blog, Daniel says NIST, part of the Commerce Department, is taking steps to engage the insurance industry in further discussions on the framework.

At a Senate hearing on July 25, NIST Director Patrick Gallagher said the cyber-insurance marketplace hasn't matured to the point where large, critical infrastructure operators can transfer a significant portion of their cyber-risks to insurers. But Gallagher suggested the cybersecurity framework could help encourage that maturity [see Debating the Maturity of Cyber-Insurance].

"You need to monetize the risk; this comes down to measuring and understanding and developing an actuarial basis for this risk to be imbedded into the market," Gallagher told the senators. "This discussion has come up quite frequently in the framework process, and I think as part of the metrics discussion this is something being looked at and something that would be quite helpful."

Most organizations - whether deemed critical infrastructure or not - do not carry cybersecurity insurance. A survey of chief risk officers and chief information security officers conducted by the Ponemon Institute, and released on Aug. 7, reveals that only 31 percent of companies in the United States carry cybersecurity insurance, although 39 percent of respondents say their organizations plan to purchase a policy in the next 12 months.

The reason cyber-insurance could be an incentive is the realization that it could be a vital component of an organization's risk-management strategy. "People are recognizing that security incidents are a real threat, and in terms of prudent risk-mitigation strategy, boards of directors and senior-level management are saying this is a proven part of what we should do to protect the business," says Michael Bruemmer, vice president at Experian Data Breach Resolution, a breach incident response services firm that sponsored the Ponemon study.

Among the reasons risk and security officers cite for not purchasing cybersecurity insurance: expensive premiums, too many exclusions, restrictions and uninsurable risks and inability to get insurance underwritten because of current risk profile. 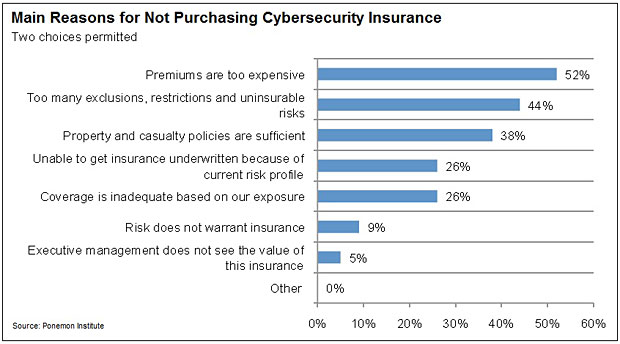 Daniel says the recommendations for cybersecurity insurance as well as the other areas were created in a relatively short timeframe with the understanding they're not fully developed.

Take, for example, the incentive for liability limitation. The three departments point to a range of areas where more information is necessary to determine if legislation to reduce liability on program participants may appropriately encourage a broader range of critical infrastructure companies to implement the framework. These areas include reduced tort liability, limited indemnity, higher burdens of proof, or the creation of a federal legal privilege that preempts state disclosure requirements. As the framework is developed, agencies will continue to gather information about the specific areas identified in the reports related to liability limitation.

In his blog, Daniel addresses other areas:

"While these reports do not yet represent a final administration policy," Daniel says, "they do offer an initial examination of how the critical infrastructure community could be incentivized to adopt the cybersecurity framework as envisioned in the executive order."

Top 6 Application Security Hurdles and the Secret to Overcoming Them