Chinese advanced persistent threat groups compromised networks of telecommunication providers across Southeast Asia in an effort to harvest customers' sensitive communications, according to a new report from the security firm Cybereason. As in other Chinese cyberattacks, these APT campaigns exploited flaws in Microsoft Exchange servers.

Researchers identified three clusters of attacks associated with the campaign that it attributed to the Chinese APTs Soft Cell, Naikon and Threat Group-3390. The firm says overlaps in the attackers' tactics, techniques and procedures suggest a connection between the groups.

"It is not surprising that the telcos targeted in these intrusions are located in ASEAN [Association of Southeast Asian Nations] countries, some of which have long-term, publicly known disputes with the People’s Republic of China," Cybereason says in its report

The security firm says at one time, each cluster was observed in the same environment, operating on the same endpoints at around the same time.

"The attackers exfiltrated hundreds of gigabytes of data collected from the network," Dahan says. "Knowing the threat actors targeted major servers … gives us an indication that PII was also likely compromised."

The new Cybereason report finds that the Chinese APT groups conducted an "adaptive, persistent and evasive" campaign to obscure activity and maintain persistence on infected systems.

"These attacks compromised telcos primarily in ASEAN countries, but the attacks could be replicated against telcos in other regions," the security firm says. "While the prevailing assessment is that the operations were intended for espionage purposes only, the fact remains that had the attackers decided to change their objectives from espionage to interference, they would have had the ability to disrupt communications for any of the affected telecoms' customers."

Lior Div, CEO and co-founder of Cybereason, notes: "The attacks are very concerning because they undermine the security of critical infrastructure providers and expose the confidential and proprietary information of both public and private organizations that depend on secure communications for conducting business."

State-sponsored espionage operations "not only negatively impact customers and business partners; they also have the potential to threaten the national security of countries in the region and those who have a vested interest in the region's stability," Div adds. 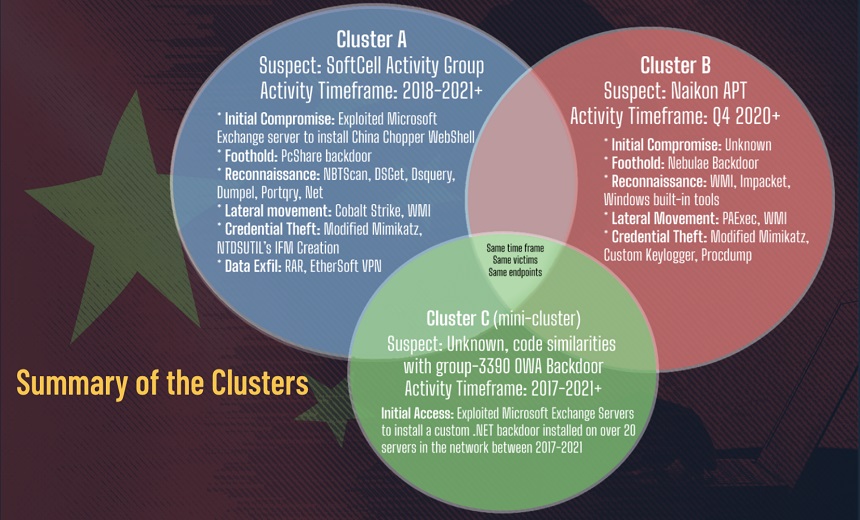 Cybereason attributes one cluster of attacks to Soft Cell, an APT group in operation since 2012 that had previously targeted telecom providers in the same region of Southeast Asia. Telemetry and forensic evidence shows that the naming conventions, tools and TTPs in this cluster are similar to those attributed to Soft Cell in previous research.

Cybereason attributes another cluster of activity, first observed in late 2020, to the Naikon APT, based on the unique TTPs involved, including tools and command-and-control server infrastructure. Researchers say this APT:

A third cluster involved deployment of a custom Outlook Web Access backdoor used to harvest credentials, Cybereason reports. Activity dates back to 2017; backdoor deployment continued into this year, including a sharp uptick in March, perhaps in response to Microsoft's patches for its Exchange Server vulnerabilities.

Code analysis shows similarities with the backdoors "Dllshellexc2007" and "Dllshellexc2010," discovered by TrendMicro and attributed to Group-3390, or APT27, aka Emissary Panda. For example:

Last month, the U.S. indicted four Chinese nationals connected to the nation's Ministry of State Security over an alleged hacking campaign conducted from 2011 to 2018 that targeted universities and government entities to obtain trade secrets, medical research and other intellectual property (see: US Indicts 4 Chinese Nationals for Lengthy Hacking Campaign).

Cybersecurity Trends and Predictions for 2022-2023