Could your organization withstand an attack by the master hacking operation known as "Fxmsp," which promised to help criminals become the "invisible god of networks"?

Hollywood loves to portray hackers as being like Neo in the movie "The Matrix" - recoding the world's fabric with ninja-like skills - or able to do the Ethan Hunt "Mission Impossible" cyber equivalent of rappelling down air shafts undetected to gain access to the world's most secure bunkers before successfully disappearing without a trace into the night with the corporate crown jewels.

In reality, however, for successful criminals, time is money. (The same also goes for intelligence agencies' hacking teams or affiliates.)

Simplicity, in other words, reigns. That's why if criminals or nation-states want to exploit a network, they'll typically hit it using the simplest, least technical and most inexpensive techniques. (As a bonus for intelligence agencies, if criminals are already using these tactics, then it's tough to tell is there's an espionage angle or not.)

Cue Fxmsp: A recently released report by Singapore-based cybersecurity firm Group-IB recaps the tactics regularly used by Fxmsp, which can refer to both an individual as well as a hacking team gathered by the group's leader that was organized in a sophisticated manner (see: Fxmsp Hackers Behind AV Source Code Heist: Still Operating?).

But the group's hack-attack tactics were often anything but sophisticated. Again, if simplicity works, why complicate things? Notably, one of Fxmsp's favored moves was to brute-force companies' remote desktop protocol credentials. And why not, since even today, this tactic remains cheap, easy and effective?

Another favorite tactic for the group, according to New York-based fraud prevention and risk management firm Advanced Intelligence - also known as AdvIntel - was that after gaining remote access via RDP, the group would move to gain administrative-level access to a firm's Active Directory installation as quickly as possible.

"Compromising AD means that attackers can get access to all the different user accounts and other company systems," Huy Kha, an information security professional at a Dutch law firm who's an expert on Active Directory security, told me last year when Fxmsp's attacks came to light.

Despite employing some relatively simple tactics, over a three-year period, Fxmsp gained access to 135 organizations' networks across 44 countries, including businesses in the U.S., U.K., Russia, Singapore and beyond, Group-IB says. The security firm conservatively estimates that Fxmsp earned at least $1.5 million as a result.

"This, however, does not include the 20% of companies to which he offered access without naming the price, and the sales he made through private messages," Group-IB says. 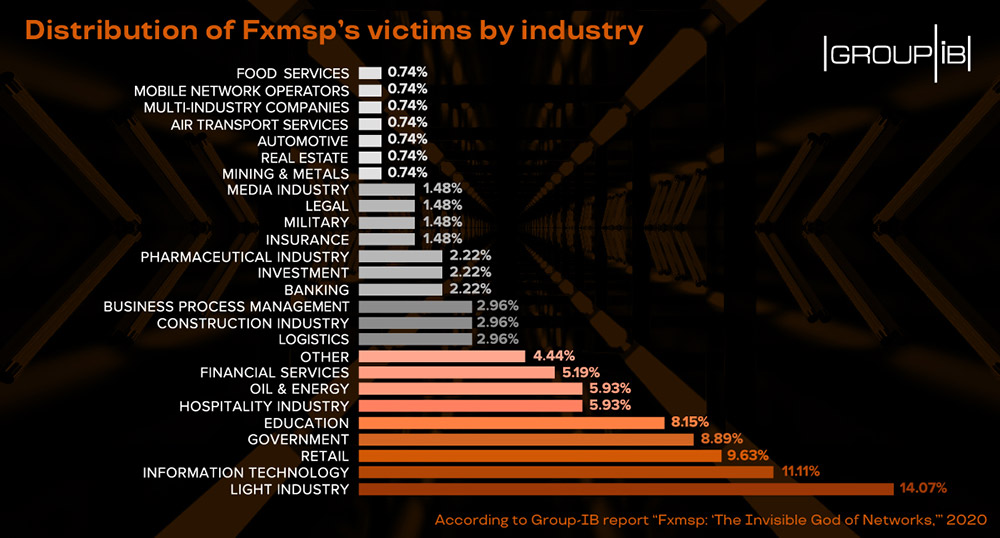 Experts say the group was extremely well-organized and used teams of specialists, built a sophisticated botnet and sold remote access and exfiltrated data in the course of perfecting the botnet to help monetize those efforts.

Or at least that was the group's MO until AdvIntel dropped a report in May 2019 documenting Fxmsp's activities. Shining a light on the gang - which relied in large part on advertising via publicly accessible cybercrime forums - caused the group to disappear.

"The Fxmsp hacking collective was explicitly reliant on the publicity of their offers in the dark market auctions and underground communities," Yelisey Boguslavskiy, CEO of AdvIntel, tells me.

After the report's release, he says Fxmsp disappeared from public view, although it's not clear if the hacker with that handle might still be operating privately (see: Hacking Timeline: Fxmsp's Rise and Apparent Fall).

Study Fxmsp's historical operations, and a less-is-more ethos emerges. "In most cases, Fxmsp uses a very simple, yet effective approach: He scans a range of IP addresses for certain open ports to identify open RDP ports, particularly 3389. Then, he carries out brute-force attacks on the victim's server to guess the RDP password," Group-IB says in a recap.

If that gave Fxmsp remote access to the targeted network, Group-IB says the attack would typically proceed through these stages:

For network defenders, studying Fxmsp's moves and ensuring they have appropriate defenses in place remains a smart strategy because other attackers continue to use many of the same tricks (see: Ransomware Gangs' Not-So-Secret Attack Vector: RDP Exploits).

But the big-picture takeaways are simple: Continue to learn from real-world attacks and ensure you have the right defenses. Above all, don't let simple attacks succeed.