Own a Piece of Bitcoin History

Do you have $100,000 burning a hole in your pocket and an abiding love of bitcoins? If so, then the U.S. Marshals Service has an offer you can't refuse.

On August 8, the Marshals Service (part of the Department of Justice) announced that it's auctioning 2,719.32669068 bitcoins obtained by the U.S. government via forfeitures related to nine different cases - some federal, others civil or administrative. At current exchange rates, those bitcoins would be worth $1.6 million.

"The [U.S. Marshals Service] does not make any representations or warranties regarding bitcoin."

Now, the Marshals Service is planning to sell all of those bitcoins in a single block to the highest bidder, having been "granted authority to manage and sell these bitcoins through court orders" related to the nine cases.

Until 12pm ET on August 18, anyone of any nationality - provided they're not on the U.S. Treasury Department's Office of Foreign Assets Control list of "Specially Designated Nationals" - who wants to bid for the bitcoins can register with the Marshalls Service. Would-be bidders must provide some personal details, including a copy of a government-issued photo ID, their name, address, phone number, email address and taxpayer identification number. Any non-publicly traded entities or syndicates who want to register, meanwhile, must list personal details relating to anyone who's an officer of the company, owner, trustee or on its board of directors.

Would-be bidders must also send $100,000 - payable in U.S. dollars only - as a deposit to the Asset Forfeiture Fund at the Federal Reserve Bank of New York. The wire transfer must originate at a U.S. bank.

By 5 p.m. that day, the Marshals Service says that it will select and notify the highest bidder, who will then have until Aug. 23 at 2 p.m. to wire-transfer the funds in full from a U.S. bank. "Failure to provide the USMS with a copy of the wire transmittal receipt by the deadline will result in disqualification, forfeiture of the deposit, and award to another bidder," it says.

This is the fifth bitcoin auction to be held by the Marshals Service. The most recent auction, in November 2015, involved 44,341 of the up to 144,000 bitcoins that were seized from Ross Ulbricht, a.k.a. Dread Pirate Roberts, which were mostly sold in auction blocks of 2,000 bitcoins each. Ulbricht was convicted of running the notorious darknet marketplace Silk Road and received a life sentence. Previous auctions have reportedly also sold bitcoins seized from Silk Road users. 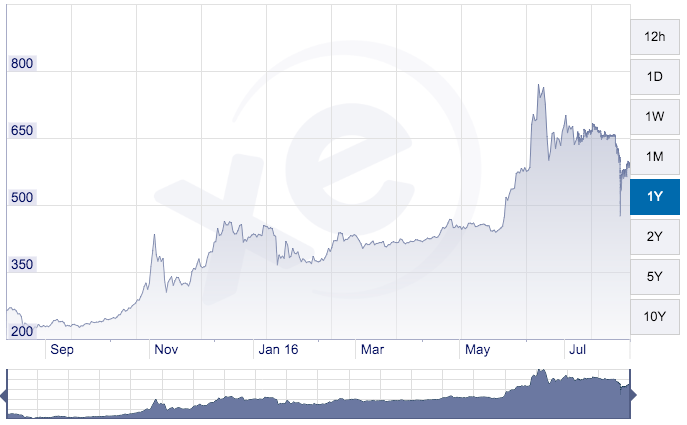 What makes this latest block of bitcoins special is that it includes not just bitcoins forfeited by Ulbricht, but also by Carl M. Force IV, formerly a special agent with the Drug Enforcement Administration who'd been assigned to a Silk Road task force. The 15-year DEA veteran pleaded guilty last year to stealing $820,000 worth of bitcoins while helping to run the U.S. government's investigation. In October 2015, he was sentenced to serve a 6.5-year prison sentence.

As with all things cryptocurrency, however, these bitcoins' provenance is no guarantee of their future value. Or as the Marshals Service says, "the USMS does not make any representations or warranties regarding bitcoin."

Appropriately for a pseudonymous cryptocurrency, however, the Marshals Service does promise anonymity. "The USMS will not release any information to the general public pertaining to the auction process or results, except for the number of registered bidders and the number of bids received."

Own a Piece of Bitcoin History